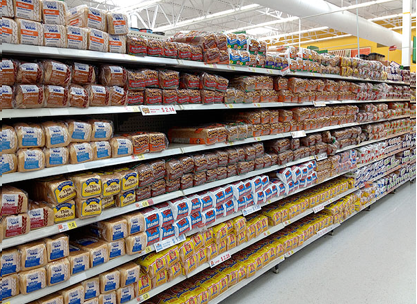 The bread aisle can be as long as 68 feet, and 99.99 percent of it is made of hybrid dwarf wheat.

Twenty percent of all calories consumed in the United States come from wheat products. In supermarkets, the bread section can be up to 68 feet long. Regarding that unhealthy bread from hybridized wheat, William Davis, MD, wrote: “It is the ultimate hubris [exaggerated pride or self-confidence] of modern humans that we can manipulate and change the genetic code of another species to suit our needs. . . . [T]oday, genetic modification and hybridization of plants we call food crops remain crude science, still fraught with unintended effects on both the plant itself and the animals that consume them.” [Wheat Belly, Rodale, 2011, p. 228.]

The effect of wheat hybridization on humans was not studied before dwarf wheat was released into the commercial market in 1956. Perhaps why I escaped that was because, as I mentioned, my father grew wheat, oats, and barley. So when we harvested a field, a certain amount of it was saved for seed for the next year, most of the rest was saved to feed the animals, and a small amount was set aside to feed the family.

We would grind that grain and make our cracked cereal for breakfast; and we would put the raw goat’s milk or raw cow’s milk on it, whatever we were milking at the time. Because father basically took sugar out of our house when I was five years old, we started eating honey for our sweetener.

When I left home and went to Canada to homestead, I took wheat seed to plant. Then I got so busy, I quit growing it; and one day I woke up and realized I was eating what was in the store.