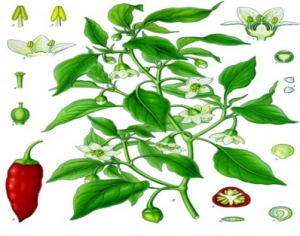 Researchers from several universities, including UCLA and UC Davis, used ultra-performance liquid chromatography (UPLC) MS-MS analysis to show “Prehispanic Use of Chili Peppers in Chiapas, Mexico.”
The study found Capsicum residue dating from 400 BC to 300 AD (Middle to Late Classic periods) in vessels from Chiapa de Corzo. The authors stated that the Mayan people apparently used peppers for religious, festival, and everyday culinary use. 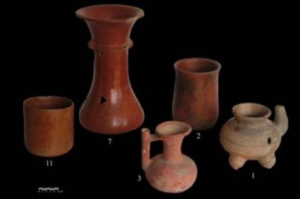 Herbal plants of the pepper family were used by the ancient Mayan people in daily life and also as medicine. This included bell pepper, cayenne pepper, and red pepper. These plants were used for skin blistering and eruptions; when blood was found in urine, feces, or vomit; and for delays in childbearing.
Today, peppers are used by Mayan healers to rid the body of intestinal worms and parasites. Peppers are also used in cold and flu remedies and to ward off evil spirits.

Note: Statements about ancient or current Mayan spiritual beliefs and medicinal practices are merely descriptive. No statement is intended as medical advice.