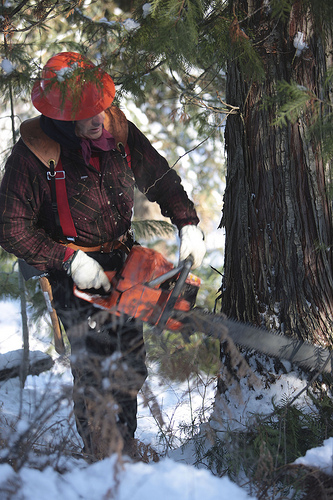 In this photo Gary is cutting fir trees–a familiar sight to those who participate in the YL winter harvest. Gary wonders if his logging accident in 1973 was a result of a faulty paradigm?

When I was a preteen, I listened to my father tell a friend, “You know, with my luck, if I were riding my horse down the trail and saw a large gold nugget lying on the trail, by the time I picked it up, put it in my saddlebag, and got it to the bank, it would have turned into a road apple.” (For city folks, a road apple is a cow pie.)

That was my father’s belief system that I grew up with, that nothing good could happen in my father’s life. Then he died as a result of an accident and cancer at the age of 60. I took care of him, paid his hospital bills, paid for his funeral, including his coffin, because he died penniless and left my mother with nothing. Then I took care of her until she died two years ago.

So I look at this and know it was difficult for my father because he watched me as I left home, went out on my own, started developing a business, and was becoming successful. It angered my father. He had a great deal of resentment about my success in life. Subconsciously, I would do things to destroy my success, because I didn’t want to lose my father’s approval. It took me a long time to realize what I was doing.

I believe my accident in 1973 was related to that very thing, because I was a very successful logger in Canada and had two incredible contracts at the very young age of 22 that any other logger would have been thrilled to have. I really have wondered if I created that accident because I didn’t want my father to be upset with me for being more successful than he was.

So we do things subconsciously because we’ve set up our paradigm and don’t realize it. We act it out or we live it out and then wonder why we can’t succeed in business or in other areas of our lives. No matter what I’ve done in my life, I’ve always been blessed to be successful, but I had to hold tight to that success because of my tendency to self-sabotage.