Seeds from Growers, Not Greenhouses 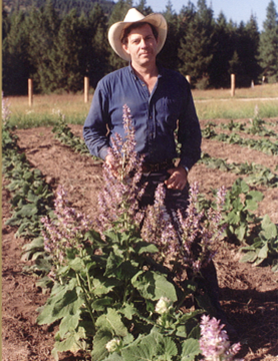 The first lavender seeds came from France in 1985. Then I continued bringing seeds in ’91 and ’92 that were to be planted later. These plants and seeds were planted in Mona, Utah, in 1996, and the rest is history.

That’s a picture of me in my clary sage field in 1996. And can’t you tell, I haven’t aged a bit! There is a great story of where our clary sage seeds came from. The original clary sage came from France and was planted, grown, and harvested on the farm in St. Maries from 1993 to 1996. I finally gave up there because the deer were my biggest competitors. They love clary sage. What’s really interesting is that after a study was done with the Idaho fish and game, we found that when the deer eat clary sage, the does produce more twins. Unequivocally, more twins.

Today clary sage is grown at the Young Living farm in Utah; you’ll see it when you visit. When it’s going into bloom, it is magnificent. You can see German chamomile being distilled at the farm on Convention Farm Day, and you can also see juniper being distilled. On our recent Farm Day, the lavender had just started blooming. It was a little late this year.

Our melissa plants came from France in 1991. Why did I bring seed from there? Because I was able to go to the farms and get seed from the growers who were growing it in the field. It wasn’t genetically modified and it wasn’t grown and produced in a greenhouse.