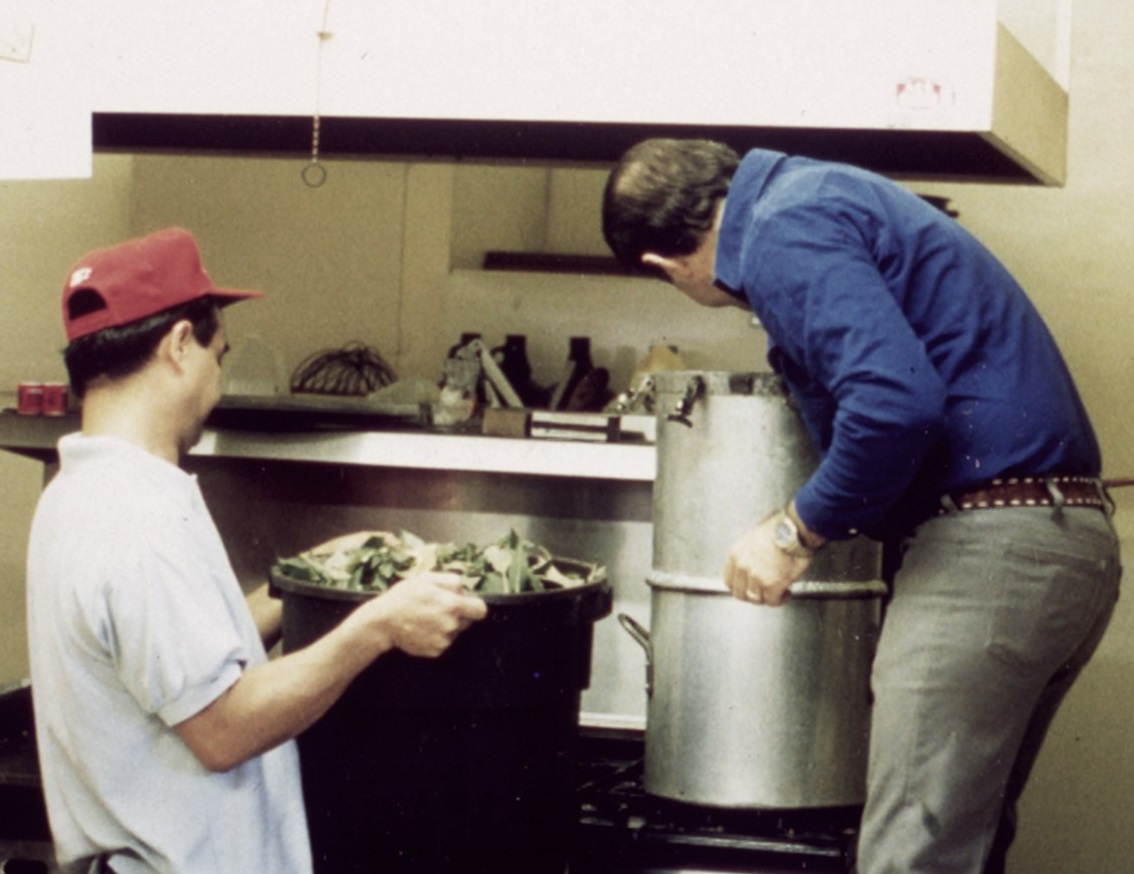 This is Gary’s first pressure-cooker distiller. The copper pipe you see by Gary’s belt is the swan neck going to the condenser that was coiled up in the sink full of cold water.

While I traveled in France from 1985 to 1990, I met a lot of people but had never met someone who would teach me about distillation. So I read books and hired a teacher who taught French at the community college in Spokane to teach me French. After taking classes for six months, I was really good at saying oui oui and merci beaucoup. And that was about it.

But I would have him translate the books so that I could read them. I started trying to learn from little booklets on distillation and was very excited, so I built this distillery in 1990—two pressure cookers welded together. In the top one, I drilled holes in the bottom, so I could put the plants in the top and use the bottom as the boiler. That’s where I put the water that created the steam. The copper pipe coming out behind me by my belt is the swan neck going to the condenser that was coiled up in the sink full of cold water.

And that’s where it began; that’s where I distilled my first lavender oil that launched Young Living today. I planted the starts the winter of 1988 in the greenhouse, grew them, planted them in the little garden here in the spring of 1989, and then harvested them in 1990, two years prematurely, because I didn’t know the difference. They had little flowers and I thought that was good enough. So I cut them, distilled them, and sent the 3 milliliters of oil off to Dr. Kurt Schnaubelt.

He analyzed it, sent a fax back, and asked, “Dr. Young, where did you get this oil?”

So I called him on the phone and said, “Well, I distilled it.”

And he said, “No, there’s no lavender growing in Washington.”

He said, “Are you serious?”

I replied, “Yes, I’ve been growing lavender; and I cut it, distilled it, and just sent it to you so you could analyze it for me.”

He replied, “I have a hard time believing that; but because I know you, I believe you. This is the finest lavender oil I have seen in many years.”

So I blame Kurt Schnaubelt for everything else.