Reflections from the Balsam Fir Harvest

For the last several years the reputation and demand for Young Living Therapeutic Grade™ (YLTG) balsam fir essential oil has skyrocketed. Its recent inclusion in the popular new Deep Relief™ Essential Oil Roll-On caused supplies to dip to a critically low-level, and replenishing the balsam supply became a top priority. Gary Young, one of only a few people worldwide with experience distilling therapeutic-grade balsam fir oil, personally took the assignment. 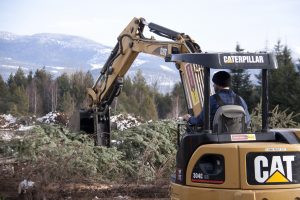 Gary thought the harvest would double as a great learning/team building opportunity for employees and members alike, enabling them to “get their skin in the game.” He extended an open invitation to everyone at Young Living, citing “…bitter cold temperatures, treacherous icy roads, hard work, long days and little sleep,” with the consolation that, “you won’t starve or freeze and you’ll learn a lot.” Despite his shortcomings as a travel agent, he was true to his word and for a few days several of us ditched our desks to experience the balsam harvest first-hand. After all, according to Gary, “There is no better way to understand the seed to seal stewardship.”

My time in Idaho was a great chance to reflect on what makes Young Living truly special and gave me an even deeper respect for our founders. Particularly impressive was Gary’s hands-on approach; no matter the task, there he was—founder and president of Young Living—setting the pace. Gary often says, “I’ll never ask anyone to do something I’m not willing to do myself.” He usually utters these words right before performing a white-knuckle snowmobile maneuver, but during the harvest I found this philosophy applied to work as well.

Gary’s days began at 3 a.m., as he started the first of two three-hour driving legs, and ended around midnight after the trucks were unloaded. He personally executed or oversaw every phase of production from harvest to distillation, and anyone watching would have been amazed at the mastery, urgency, and care in his work. Of course anyone caught observing would have been quickly put to task, as I learned first-hand. In one instance I interrupted Gary running the shearer (the tree cutting machine) to call him to another task that needed his attention. He exited the machine and indicated that I should assume the controls. I shook my head and said, “I’ve never done this.” He smiled and said “If you’ll only do what you’ve already done you won’t do much.” He then gave me a two-minute crash course and promptly left. I nodded sheepishly and went to work a little wiser from the lesson.

Late one night after a long and tedious process unlocking frozen brake lines, Gary showed me his battered knuckles, smiled and said “Can you imagine my so called ‘competition’ doing what I do?” I shook my head and said, “No one knows or cares like you do, in fact no one is even close.” The moment summed up my impressions from the trip: It was a wonderful microcosm of the pioneering spirit, purpose, and passion that drives not just balsam fir, but every essential oil Young Living produces.

In celebration and honor of the recent harvest, and Young Living’s total commitment to quality, I invite everyone to plug into the balsam fir educational opportunities offered online. Simply visit the product blog online, watch the video on our website, or listen to the conference calls featuring Gary. I think you’ll enjoy Young Living’s Idaho balsam fir and other products that contain it with newfound appreciation of what goes into each bottle. But more importantly, I invite everyone to reflect on the abundant harvest of blessings you have received through Young Living and the importance of sharing with others.

All the best in all the good you do,