When Will French Lavender Return? 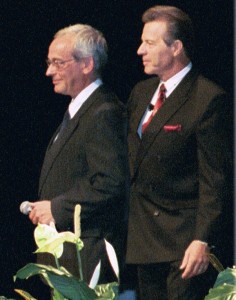 Gary and Jean-Noel Landel, the manager of the Simiane lavender farm and a guest speaker at the 2002 Young Living convention.

While visiting with Benoit Cassan, the former president of CRIEPPAM (the technical research center for lavender growers and distillers in Provence, France) and the largest grower in and around Simiane, Jean Noel asked him if he would have any angustifolia that I could buy.

He said that wouldn’t be possible, and even the orders of his buyers who he has supplied for the last 15 years were being cut back by 50 percent, and the 50 percent that he was supplying them was being mixed half and half with lavender angustifolia and cloned lavender.

He went on to explain that in their latest association meeting, they discussed the possibility of taking all of the lavender out in all of France to sterilize the soil and kill the virus that has been attacking and killing the lavender for the last 10 years.

Then in 5 years when the soil had been nourished and built back, they would replant and start over. But even if they were successful, it could be up to 8 years before the lavender would be back on the market.

However, the farmers cannot wait 8 years for a crop, so they will replant a different crop. Once the new crop is established, the farmers will not take it out and put lavender back in again.

Thankfully, the lavender in our valley in Simiane was not affected by the virus, only by the drought.